Cooling in marine engineering is vital, an engine or part that creates friction and heat needs to cooled down, if it is not the engine can create excessive wear run poorly and eventually stop or seize due to the immense heat created. cooling systems have developed over the years from simple water pump systems to complex heat exchanger systems.

Explain the terms:
Conduction:
Conduction is the transfer of heat between objects of matter (solids). Heat moves from an area of high temperature to areas of lower temperature this is the basis of heat transfer in engines.

Conduction in a simple experiment.
Convection:
Convection is the transfer of heat in fluids (Air,Liquid), heat is transferred by molecules and follow a current of heat transfer called a convection current. heat can be removed from one area and be localised in another area, like in a heat transfer unit in a engine.

Simple diagram of a convection current
Radiation:
Radiation is the transfer of heat through empty space, heat emitted from an object or liquid travels out into cooler empty space or air. This principle is the basis of the radiator in a car. 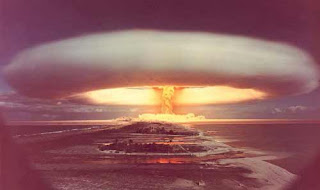 A nuclear explosion gives off an incredible amount of thermal radiation.
What is Direct cooling
Direct cooling in a marine application, is the cooling of an engine with a raw water pump system. This system works by drawing raw water (either salt water or fresh water) in through a port on the bottom of the boat called the sea cock. This raw water is then drawn through filters by a powerful pump and circulated through the water jackets of the engine, the heat from the engine is transferred to water. this water is then expelled from the engine. This type of cooling is very effective, however drawing raw water (especially salt water) through an engine can severely corrode the engines water jackets and damage the engine unless corrosion protection measures are in place. Another type of Direct engine cooling in automotive use is air cooling. This is where an engine is cooled by air flow over the hot cylinder block. Large fins are moulded on to the block to increase the surface area and therefore increase the radiation heat transfer quality's.

Just because i can, the most powerful air cooled radial engine. The pratt and whitney R-4360 major, Four radial engines connected to a common crank shaft with 28 pistons!
What is indirect cooling?
Indirect cooling in a marine application is a cooling system that draws heat away from the engine with water and cools the water using a heat exchanger. In some respects it is similar to a car radiator system. Water that is circulating around the engine block draws heat away from the engine parts. This hot water is pumped to the heat exchanger, this device works by drawing raw water through a similar system to direct marine cooling but the raw water is only pumped through the heat exchanger the hot water circulating the engine transfers it's heat to the colder raw water which is then expelled from the system. This solves the problem of direct cooling corroding an engine block with raw water, this system leaves only the interior of the heat exchanger corroded which car be quite easily replaced. The now cooled fresh circulating water is sent back to the cylinder block water jackets. Most modern marine engine use this cooling system. In the automotive trade a water pump circulates water around the engine and the water is cooled in a radiator which is exposed to air flow. 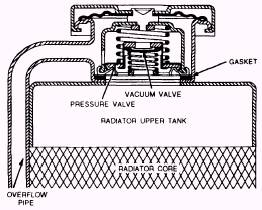 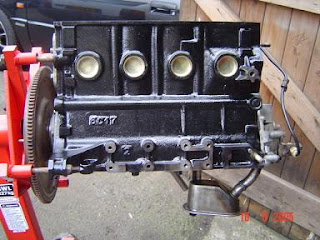 Diagram of heat flow in a plate heat exchanger
How does the centrifugal circulating water pump work?
In a liquid cooled engine, water or another liquid transfers heat from the engine to the the water, if the water is not circulated then the water will become very hot and will lose all cooling heat transfer. A centrifugal water pump has a impeller powered by an electric motor or belt from the crank shaft, this impeller draws in water and forces it out circulating water through the water jacket. Because the water always flows one way through an engine, metal edges inside the engine can be rounded and obstructions can occur. Centrifugal pump cutaway
How does a raw water pump work?

A raw water pump works in the same way as a centrifugal water pump, the only difference is that the raw water pump is used to 'suck' water through the sea cock from the ocean or lake for purposes of cooling the engine.

Rubber Impeller removed from housing
When fitting a impeller what should you check before refitting the housing and why?
When refitting an impeller, checks should be made to ensure that the impeller is housed the right way but more importantly that the lock key is secured. This small lock key ensures that impeller spins with the shaft in the center by locking the impeller to it. If this is not secured the impeller will spin freely on the shaft and not draw in raw water which could overheat and damage an engine, it could also damage the impeller.

What is the purpose of an oil cooler and how does it work?
Oil just as much as coolant water can heat up to the point where it is inefficient at its job (lubrication), oil percolates at high temperatures and loses its qualities. An oil cooler transfers heat from the oil in a similar fashion to a heat exchanger. Water diverted from the raw water intake is sent to cool the oil via heat transfer. Oil has a higher boiling point than water so requires less cooling.

Automotive oil cooler
What is the process of a inter cooler/after cooler how does it work?

Automotive Inter cooler
Why do we have Inhibitors & antifreeze?
Antifreeze performs a variety of tasks in an engine including sealing and raising the boiling temperature of the water it is mixed with as well as lowering its freezing point. Overheating can damage parts of the engine and if the temperature is cold enough for the water to freeze the expanding ice could crack and destroy a cylinder block. Different strength mixtures of antifreeze are available. Strong mixture ratios are required in very cold or very hot areas where boiling or freezing is more common. Inhibitors are a liquid that prevents corrosion on the inside of an engine. A thin film layer of inhibitor coats the inside of the water jacket and pipes, this layer helps protect the metal from cavitation, oxidation, water flow and general wear. And just because i can again, The Strand Craft 22, a beautiful invention, with custom built super car that fits in the garage!
References:

http://en.wikipedia.org/wiki/Plate_heat_exchanger
Posted by Joel at 7:19 PM