The largest Diesel engine in the world
A Diesel engine is a type of internal combustion engine that utilises high compression ratios and fuel injectors to create compression-ignition. Diesel engines are quite simple in design, utilising many common parts with a petrol engine, but instead of a spark plug as the source of ignition, diesel fuel being injected into the combustion chamber is ignited by the very high temperature of the compressed air in the cylinder. Diesel engines are typically more robust and parts are much stronger to deal with the increased pressures and heat of the very high compression ratios. Compression ignition is generally a very efficient form of  internal combustion engine, far less heat is wasted in a diesel engine when compared to a piston engine, for this reason modern diesel engines are now becoming more common in passenger cars after years of being shunned in favour of petrol engines. Diesel engines had a reputation for being dirty which is only just being changed. In contrast the diesel engine has become almost universal on trucks, construction machinery, large marine applications, power generation, and types of trains. Diesel engines produce very high amounts of torque and low end power which is necessary on heavy machinery.

The Diesel engine was developed by Rudolf Diesel a German inventor and engineer who, with a knowledge of thermal engineering created a compression ignition engine in 1897 that was to become the diesel engine. Rudolf diesel found out that the petrol engine, which had only been invented  fairly recently, was very inefficient in combustion utilising only about 25% or less of the heat created, the rest of the heat was wasted. He developed the diesel engine and eventually gained a efficiency of 75%, this success led to the diesel engines being adopted for applications that previously employed steam engines which were far more inefficient than diesels. Because of the weight of the robust diesel engines it was not widely used or at all in aircraft or passenger vehicles, but was used in everything from power stations to submarines, the slow and constant power made it ideal for large heavy ships. Modern Diesel engines are now highly developed and are reaching an equivalent power to a petrol engine with great efficacy.

The Audi R18, winner of Le Mans 24 hour, is an example of an efficient, powerful diesel engine.
What fuel pressure would you get from a diesel pump?
A diesel injection pump supplies the diesel injectors with fuel via a camshaft system. Because of the incredibly high pressure in the cylinder of a diesel engine, the injectors need very high fuel pressure to enter the cylinder. a Diesel pump typically provides up to 15000 psi in fuel pressure or more, even reaching up to 30000 psi. Extra care must be taken when working with high pressure pumps. 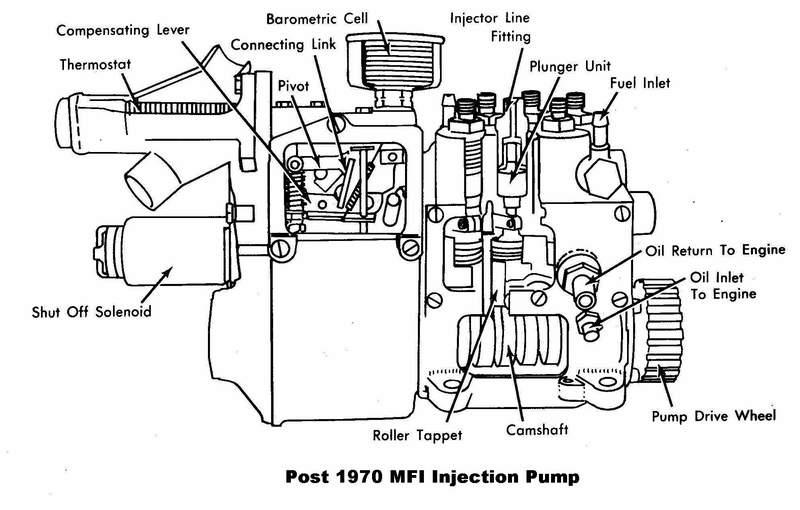 A DTI gauge, used to time the injection pump.
What is the purpose of glow plugs? and how do you test a glow plug circuit?
A glow plug is essentially a heating element that is mounted in a diesel engine in the combustion or indirect combustion chamber. Because diesel engines rely on very hot compressed air to ignite the fuel, diesels can have trouble starting in cold conditions. the air in the cylinder is too cold for ignition and fuel can be wasted trying to heat the engine up enough. The purpose of the glow plug is heat up the air in the cylinder with it's heating element enough for combustion of fuel. A glow plug can be tested by either checking the resistance on it through a multimeter, or applying a current to the glow plug and monitoring the colour change and amperage of the plug. a glow plug can lose it's effectiveness over time, by not heating enough.

What is the purpose of a lift pump on a diesel engine?
A lift pump functions to raise the level of fuel or other liquid up through a given system. In automobiles, the fuel lift pump works to build pressure or suction in the gas tank, thereby encouraging the fuel level to rise to the injection systems and on to the engine block

A simple mechanical lift pump
What is the purpose of the electronic fuel shut off valve?

A diesel engine unlike a petrol engine does not rely on an electrical system to create ignition, this means a diesel engine can run as long there is a fuel source. The electronic fuel shut off valve is a mechanism that ensures the fuel to the engine shut off as soon as the ignition switch is turned off. Without this valve the diesel engine could potentially keep running and destroy itself.

A simple solenoid stops the flow of fuel to the engine
What is the knock sensor for and where is it situated?
A knock sensor on a diesel engine is for monitoring the time of ignition. A knock sensor can detect early injection or ignition and can relay this information to the ECU which can adjust the ignition timing. 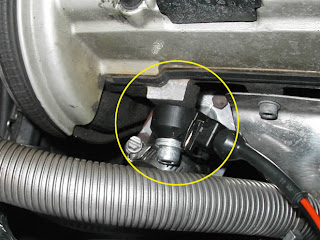 A knock sensor position on the cylinder block.
How do diesel injectors work?

Electronic Fuel injector
Why is it necessary to bleed a diesel engine after replacing a fuel filter or removing the pump?

When replacing the fuel filter or fuel pump the fuel lines are exposed to air, Diesel injectors are very precise and diesel fuel must be filtered and free of contaminants before it will run freely through the injectors. If air enters the fuel system then the engine will not run as the air is contaminating the fuel. bleeding the system removes the air and purifies the fuel.

How do you bleed a diesel system?

How does a Turbocharger work?

A turbocharger is essentially a pump that increase the power of an engine by forcing air into the intake manifold and cylinders allowing more fuel to be injected, a process called forced induction. The turbocharger is made of two turbines one turbine is driven by the hot exhaust gases leaving the exhaust manifold, this turbine drives the second turbine via a shaft. This is turbine acts as a compressor and draws large amounts of air in, compresses it and forces it into the intake manifold. A turbocharger offers big increases in engine performance, an engine some modifications to equip a turbocharger notably the intake and exhaust manifolds and gaskets to deal with the extra pressure generated.

Why are Turbochargers commonly fitted to diesel engines?

Turbochargers are in common use on diesel engines. The reason is that diesel engines, with much lower speeds and generally lower power at high speeds, are well suited to be improved by a turbocharger. Installing a turbocharger on a diesel engine can increase the spread of  the engines torque and power band, meaning the engine can perform better in more situations. as well as improving power, the turbo can improve fuel economy, and noise and vibration levels. 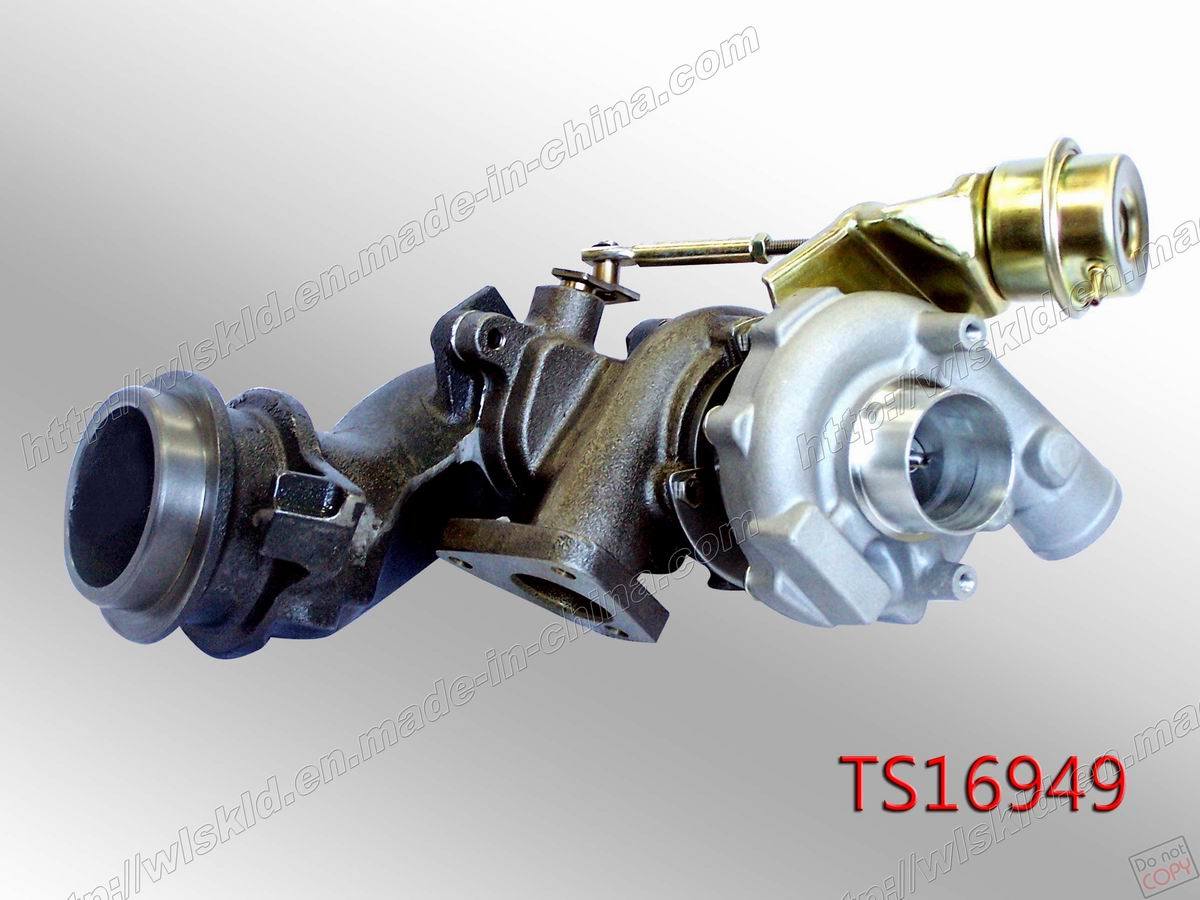 A turbo diesel system
How does a supercharger work?

A supercharger is similar to a turbocharger, it is a compressor pump that compresses air and gives an engine forced induction. Superchargers come in different types but they are all powered by a gear, chain or belt running directly from the engine. superchargers provide extremely high performance figures, but some of the horsepower created by the supercharger is used to spin the compressor turbines, in some cases as much as 40% engine power. An engine needs to be modified to mount a supercharger and to deal with the increased pressures and stress. Superchargers were originally invented for industrial purpose but were soon adapted to internal combustion engines.

A roots type supercharger
What is the difference between a turbocharger and a supercharger?
Turbochargers and superchargers are both forced induction systems which increase engine power and performance. The main difference between the systems is the way the compressor is driven. In a supercharged system the compressor turbine is driven by a Direct link to the crankshaft (Belt, Chain, or a Gear). A turbocharger however uses the power of the exhaust to drive the compressor turbine. The advantages of a supercharger over a turbo charger are: Direct power, because the compressor is attached directly t the crack shaft there is no power lag. A supercharger is also far simpler than a turbo and the parts are not under the intense heat and strain that a turbochargers parts are. A supercharger is disadvantaged by the amount of power need to run the compressor which can sap engine power. A turbocharger provides very high power and performance upgrades with relatively little modification, and does not sap as much power as a supercharger, however turbochargers can suffer from turbo lag. At low engine speeds not enough exhaust gas is being produced to drive the turbo impeller, therefore the turbo is not working properly, this can be a big problem on cars with large turbos. The problem can be lessened by staging turbos or having sequential turbos, where one turbo is in operation until a larger turbo has enough exhaust gas to run properly. Another problem with turbos is that the parts of a turbo are under immense heat and strain, leading to increased wear.

Top Fuel dragsters use huge superchargers on very powerful engines to achieve up to 10,000 horsepower or more
Why are inter coolers fitted to engines? 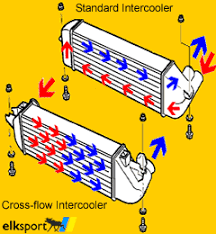 Flow of air in an inter cooler.

What is the purpose of an governor?
A vital component of any diesel engine system is the governor, which limits the speed of the engine by controlling the rate of fuel delivery. A Governor can protect a diesel engine from damaging itself by setting a maximum and minimum rpm, either mechanically or electronically.

What is the difference between a diesel and a common rail diesel? a common rail system
Diesel Engines are now finally receiving recognition by the wider public, modern diesel engines are among the most efficient in the world and continue to be developed. Volvo trucks are some of the most powerful in the world.