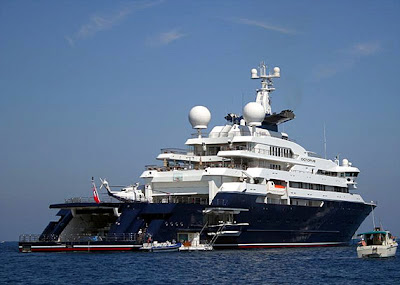 One of the biggest super yachts in the world Octopus
1. Explain the difference types of gear selection systems found.

There are many types of marine transmission for different types of motors. There is a variety of transmission types to suit different vessels. A large ship has to have incredible amounts of torque and low down power to drive a large propeller and accelerate a huge amount of weight.

A In outboard gear cases and stern drives

On outboard motors the most common type of gear selection system is the 'Dog clutch system ' this is a fairly simple mechanism that consists of a small dog clutch on a spline shaft which can be moved forwards and backwards from the central neutral position into engagement with the forward or reverse gears of the gear case. A small power boat does not need different ratios of  forward gears as they operate at a fairly constant speed to reach a destination, so a simple dog clutch is all that is required. 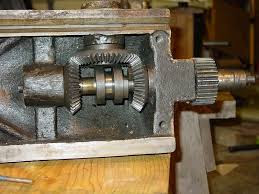 While they are simple and reliable there are some disadvantages to the dog clutch. There are no synchromesh units on a dog clutch which can make gear changes quite violent as the dog crashes into the gear. This can also damage, wear or even break the teeth on the dog clutch especially when gears are changed at high engine revolutions. The selector mechanism is also susceptible to corrosion and gear selection can be compromised.

The dog clutch can be seen in the centre.


Stern drive units have a taper drive system. Drive is engaged by a brass clutch unit with a  tapered face that mates to another tapered face on the forward or reverse gear. The neutral position is in the centre and the gear is moved to engage the required gear. The advantages of a taper drive is that gear changes are very smooth unlike the dog clutch, this reduces wear on the components, however the taper drive can slip if it is worn. 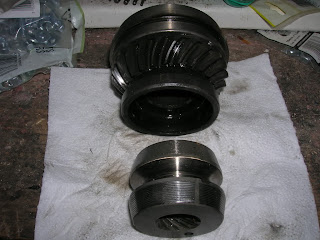 Cutaway of a Hydraulic gearbox
One of  the most common type of manual marine transmission is the planetary gear system. This system achieves different gear ratios with a planetary gear case.

Planetary Gears - Planetary gears are the most common and provide both strength and smooth operation with good resistance to torque loads.  The planetary gear systems have efficiency 65% and have a tendency to free spool when loaded, therefore a braking mechanism is needed.

Different parts of the planet gear system are held while others are allowed to rotate, this creates different gear ratios, many different ratios can be created with the use of two planetary gear cases. 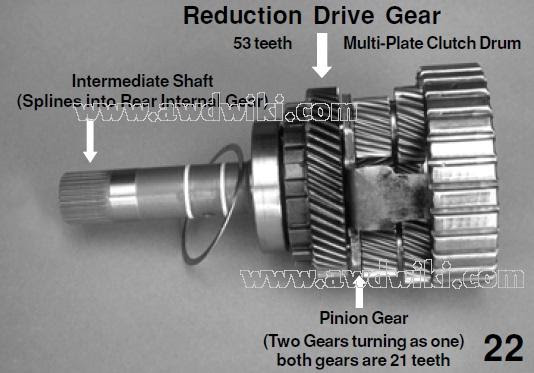 A stern drive is a drive unit that is essentially the bottom leg of an outboard attached to an inboard engine. It offers the space benefits of an outboard. and the practicality of an inboard..
2 What type of gears are used in outboards and stern legs

Outboards and stern legs typically use helical gears and pinions.

A Give an explanation of why manufactures choose this type of gear.

Hellical gears are an efficient way of transferring drive, they are strong and do not wear as aggressively as spur gears, they are also quieter. The pinion transfers drive from the power head on a 90 degree angle to the propeller it has to be Strong to deal with this load.

A duo propeller is a prop system developed by Volvo penta that utilises two contra rotating propellers to drive instead of one. A shaft and pinion from the power head drives the two propellers in opposite directions, no other gearing is necessary. The main benefit of having two propellers is the increased thrust produced, this can increase acceleration, top speed and increase fuel efficiency as well as getting a boat on the plane faster. A duo prop eliminates the lateral movement that a single propeller can give, the two propellers even each other out so the boat travels straight. Cavitation that is caused on single propellers is also reduced as the second propeller reduces slipping which creates bubbles and cavitation. Overall vibration is decreased and handling is increased.

An exploded duo prop view
4Why would a v drive be used instead of a standard shaft drive system.

A V drive unit is a part of some marine transmissions that can transfer drive through tight angles. The purpose of a v drive is simply for space. Because the drive can be transferred at tight angles less space is needed for the prop shaft, this system is common for yachts where space is at a premium.

The v drive unit transfers drive underneath the engine.

A simple yet effective v drive diagram
5 Compete a jet unit with a surface drive unit and give reasons why you would choose one system over the other.

Jet units were invented by New Zealander Bill Hamilton for navigating shallow south island rivers.
A jet unit operates on the function of drawing in water and accelerating the water through impellers out of a nozzle which can be controlled to turn the boat. The advantages of a a jet unit are: It can operate in very shallow water, Very high acceleration, good handling, and savings in space. A jet boat can operate in shallow water as there is no propeller to be caught on the ground some jet boats can operate in just 7.5cm of water. Acceleration and handling are very responsive as the water jet can be directed at will, and space is saved by having the jet unit on the transom of the boat. A jet unit is disadvantaged by its fuel efficiency which can be greatly affected if the jet intake is clogged by something, a jet unit is also affected by engine mismatch greater that a propeller boat.

Diagram of a jet unit

For these reasons i would choose a jet drive unit over a surface drive unit. It is reliable and provides very good performance, whilst being developed and improved by company's worldwide. Also I'm a New Zealander so I'm being patriotic.
Jet sprint. Ridiculous.