The cylinder head has to deal with very high stress and temperatures. Because of this the parts that make up the cylinder head have to be checked for damage, and measured to make sure they are within the manufacturers specifications.

Inspection of the cylinder head

Valve guides provide support and lubrication. for the valve as it travels up and down. Valve guides are visually inspected for damage like bending or chips. The guides are also measured in diameter at 6 locations with a telescopic gauge and micrometer to determine the amount of wear, taper and ovality. Because of the up and down movement of the valve in the valve guide, the guide can taper at the top and become oval as the valve has a thrust side where more wear happens. if a valve guide is bent then the valve can suffer excess wear.

Valves
The condition of the valves is very important as their operation is vital to engine operation valves operate under very high temperatures and ave to been tough to cope with forces.. The valves are visually inspected and measured for wear, cuts, carbon build up and operation. Valve stems are measured with a micrometer at 3 positions, the top middle and bottom. The top and bottom have the largest amount of wear as it is the largest thrust area. the stem measurement is subtracted from the valve guide measurement to find the valve oil clearance. If this clearance is too small the valve could seize.

Carbon and damage on a valve seat

Camshaft
The camshaft is responsible for the opening and closing of the valves, any amount of damage or wear to the camshaft can affect engine timing and engine operation. The camshaft is visually inspected for cuts, metal imperfections, or scuffing on the cam lobe. The camshaft lobes are measured for lift and wear. If they are worn enough then the timing of opening the valves would be affected greatly.

Lift is measured by subtracting the base Circle from the base circle and lobe lift.
Camshaft journals are visually inspected for wear and damage. Damage to the journals could make the camshaft wobble or have increased wear. Camshaft journals are measured for wear as well. If a camshaft bearing is tapered or has become oval from wear then it's operation will be affected, the journal may not spin true which may affect timing. The Journals are measured at both ends to calculate the taper from one end to the other, A high amount of taper could mean that the journal is running unevenly. Ovality is measured with a micrometer on the y and x axis, ovality is the wearing of the circular journal into an oval shape, this can make the journal and camshaft run poorly. Cylinder head bearings on modern engines are usually integral and cannot be replaced, leading to the entire head being replaced.

Camshaft run out occurs over time as the stresses on the camshaft journals wear and twist until the journal has points of wear. this also contributes to taper and ovality of the journals. Run out is measured with a DTI gauge that is positioned on the journal to record the slight changes in wear.

Bucket pad thickness
On some DOHC engines the camshaft lobes follow a bucket pad type system which is on top of the valves. These pads which are case hardened to lengthen their life span and protect from the constant wearing of the camshaft lobe acting upon it. The valve clearance and timing can be adjusted by changing the height of these pads. If the pads are severely worn then they may not be opening the valve properly, affecting the timing and performance of the engine. Bucket pads are measured with a micrometer and along with the valve clearance measurement are used to figure out the thickness of the replacement pad. 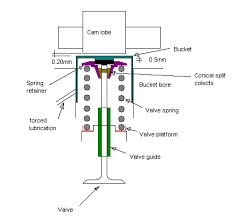